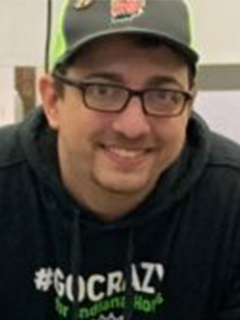 Ryan's craft beer journey started in Nashville TN when he received a case of Sierra Nevada Pale ale after working as a crew member during a Dave Mathews Band concert in September 2006. "I was totally shocked by the flavors I was tasting," he said, "but I thought I was way too poor to purchase a case of that on the regular." After moving back home to Indiana in 2009, Ryan got a job as a production member at a TV station in Indianapolis. Through working on the different tv shows there he met many craft brewers and received the idea to start growing hops for fun. After starting a small test plot in 2012 and selling to some larger brewers in Indianapolis, Ryan teamed up with Josh Martin and Todd Kaminski in 2016 to start Crazy Horse Hops. Ryan Is the CEO of Crazy Horse, a founding member of the Indiana Hop Growers Association, and a member of the USA Hops Small Grower Council.