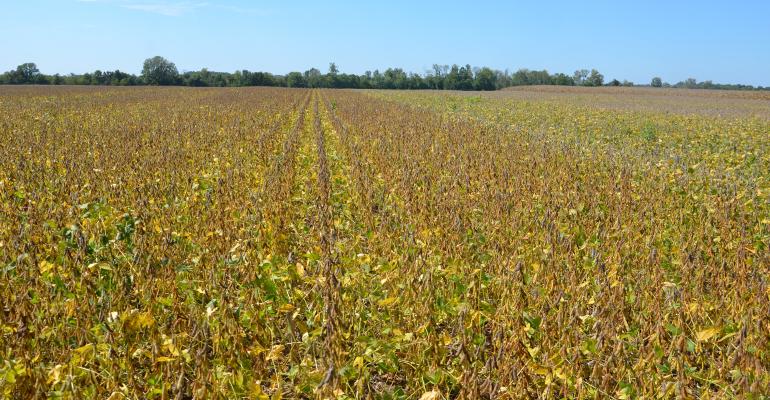 Soybean Pest Beat: Once you have it, stem canker can hang around in residue and soil.
Nov 28, 2018
Stem canker showed up in our soybeans and probably hurt yields in a couple of fields. Should we worry about it going forward? What can we do to guard against it?
The Indiana certified crop advisers answering this question include: Andy Like, sales representative with Syngenta, Vincennes; Jeff Nagel, agronomist with Ceres Solutions, Lafayette; and Darrell Shemwell, agronomist with Posey County Co-op, Poseyville.
Like: Yes, you should worry about stem canker going into next year. Here are a few ways to manage this disease for next year:
• Make sure to rotate. Use a rotation so soybeans don’t get planted in consecutive years in the same field. This will help break the disease cycle.
• Partner with your seed supplier. Select varieties that are more tolerant to stem canker.
• Watch planting conditions. Avoid planting very early and/or into wet fields.
• Consider tillage. Perform a tillage pass on fields that were infested this year to speed up infected residue decomposition and avoid future problems.
Nagel: Stem canker is more prevalent in the south but can periodically cause yield losses in Indiana. There is both a northern and southern stem canker. The primary source of infection is from infected residue. Once it shows up, it’s something to manage for the future. Fungi can survive on residue and in the soil for several years.
Infections usually occur earlier in the growing season with several days of extended leaf wetness and warmer temperatures. Symptoms typically don’t show up until reproductive stages. Plants will show reddish-brown lesions near nodes on the lower part of the stem. Lesions can expand up and down the stem and, in the case of northern stem canker, can completely girdle the stem, leading to plant death. Leaves often remain attached after plants die. Symptoms can be confused with other diseases such as sudden death syndrome, brown stem rot, phytophthora, white mold and more.
SPOT STEM CANKER: Note the lesion near the tip of the pen. This is a canker that formed on this soybean stem.
There is plant resistance to southern stem canker, but resistance isn’t as common for northern. If stem canker appears, take samples to the Purdue Plant and Pest Diagnostic Lab to confirm stem canker and whether it’s southern or northern.
Planting resistant varieties and incorporating residue to reduce pathogen survival are the main management strategies. Fungicide data is limited and generally hasn’t shown much benefit unless applied early, before infections occur. That would likely be at growth stage V3 or so.
Shemwell: Stem canker in soybeans is caused by fungi that can survive on residue and in the soil for several years. For this reason, if you’re wanting to plant soybeans after soybeans, you would want to choose a variety that has a high resistance rating for stem canker. Most seed dealers should be able to give you that information. Rotating fields to another crop such as corn, grain sorghum or wheat is also another management strategy to reduce the risk of having stem canker.
There are other management tips to help minimize the risk of stem canker, such as incorporation of infected crop residue and spraying fungicides on soybeans. Make sure you have an effective herbicide program planned for your weed control. Certain weed species serve as hosts for the fungi.
Back